Between May and November each year, the Humpback whales embark on a long migration from their feeding grounds in the cold Antarctic seas to their breeding sites in the warmer tropical waters off Australia and Fiji. Here they mate and birth the young conceived the previous year.

During the bitter Antarctic winter, the water becomes too cold for the warm blooded whales to survive. Food also becomes very scarce in this environment. By birthing their calves in the warmer waters near the equator, mother humpbacks can prepare their calves with a thick insulating layer of blubber essential for survival in the colder waters of the Antarctic. 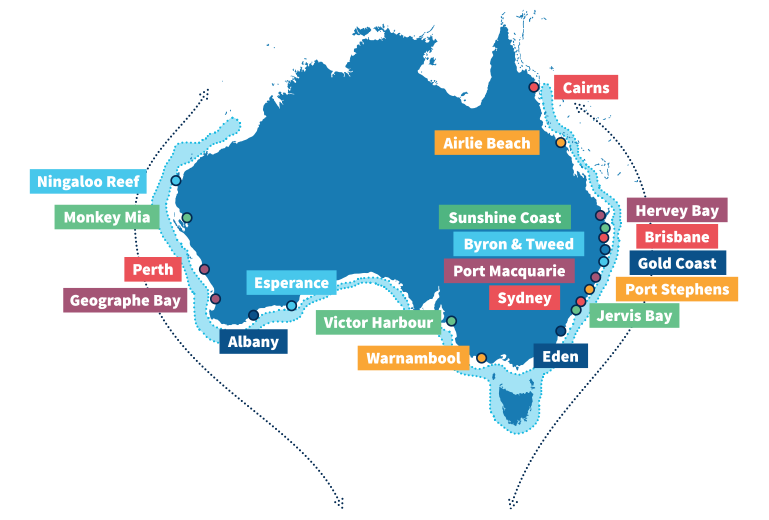 About 1,200 humpback whales make the journey up the east coast of Australia each year in groups called 'pods'.

Despite the respite in the warmer climate, during the return journey new calves need protection and help to survive the long trip home to the Antarctic. Like a cyclist in a peloton, they ride in the slipstream created in their mothers wake as she swims. Positioning themselves just beside their mother, calves benefit from the conservation of energy and protection from predators such as sharks and killer whales.

Hervey Bay is widely regarded as one of the best whale watching destinations in the world.

The reason that Hervey Bay is such a popular whale watching destination is because it is a popular holiday spot for the whales also! Each year between mid July and late October a large portion of the migrating humpback pods pause in Hervey Bay during their long return journey to the Antarctic. The whales love to relax in the warm sheltered waters between Fraser Island and Hervey Bay.

Whilst they are here they are relaxed and inquisitive meaning the whales approach the boats closer and are more playful than many other regions. If you get the chance to take a whale watching tour in August or September, grab it! It will be an experience you never forget.